A dismal season has reached a new low for the Reds.

A Liverpool side accustomed to writing history is currently breaking records of the wrong kind. Five straight league defeats at Anfield is something that’s never happened before in the club’s 129-year history.

Yet, as soon as Chelsea took a deserved lead through Mason Mount’s fine strike, another meek surrender looked inevitable.

There are mitigating factors, of course, a whole host of them in fact.

Injuries have decimated what we should always remember is a title-winning squad. No champions could retain their crown when forced to field 19 different centre-back partnerships in 27 games, no matter what Roy Keane says.

The lack of fans, something I wrote about recently, is also impinging on a team that relies on the energy of the crowd to fuel a high-octane brand of football.

Add in officiating that has bordered on the conspiratorial and you have the makings of a horror season.

With hopes of a top-four finish fading faster than an iPhone battery, it’s easy to write the campaign off and vow to regroup and go again next time around. But is dismissing a freak season, amid the backdrop of the Coronavirus, to ignore deeper-rooted problems?

Believing Liverpool will simply click back into gear next term is to overlook chinks in the armour first evidenced over a year ago – prior to the pandemic.

Cast your mind back to the inaugural winter break and our return to action after a two-week hiatus. Something had changed, and not for the better.

Despite securing three vital points against Norwich in the first game back, our performance that day left a lot to be desired.

Sadio Mane’s acrobatic effort proved the difference, the one moment of quality in a frankly dull contest. Still, Liverpool had made a habit of finding a way.

Over the next few weeks however that inevitability turned to unpredictably, as our cloak of invincibility was stripped from us.

Defeat to Atletico Madrid yielded no shots on target. An unconvincing victory at home to West Ham followed before a resounding loss at Vicarage Road, where the Reds stunk the place out.

Next a relatively strong side exited the FA Cup at the hands of Chelsea, before a nervy win over Bournemouth owed much to a dramatic goal-line clearance by James Milner.

The now infamous final game before lockdown was the return leg against Atletico when – in fairness – Liverpool were excellent and would have progressed were it not for two goalkeeping howlers.

Even so, there had been a noticeable drop-off. This was only to be expected of course given the herculean effort that had gone into the first half of the season.

Chalking up 24 wins from 25 games is unheard of and a testament to both the quality and mentality of the group.

An astonishing run that had all but clinched the title by February was bound to peter out at some point. Nobody was overly concerned.

The bigger worry is what’s followed.

Lockdown changed the footballing landscape, but such was our advantage at the top of the table, we were able to secure the title in just our second game back. Thereafter a handful of indifferent performances were excused because early title winners are known to take their foot off the gas.

Looking back, however, were there warnings signs even then?

We were hammered by Manchester City in a performance akin to one after the Lord Mayor’s Show. Immediately after, however, we faced Aston Villa at a home in a game strikingly similar to many we’ve seen in 2020/21. Liverpool looked flat and created very little against a low block. Sound familiar? 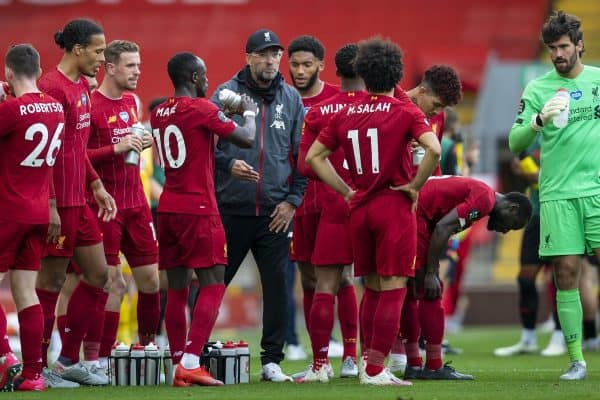 A combination of the Anfield factor and profligacy prevented Villa from taking something from the game. They would have shown more ambition this season.

An eventful win at Brighton followed before the first in what would soon become a series of Anfield stalemates, against Burnley.

A third and final defeat of the league season came away to Arsenal where errors proved costly.

It was a mixed conclusion to a historic and unprecedented campaign. Given 30 years of pain had been ended, few cared.

Yet our ‘defence’ of the title has been littered with performances in-keeping with those post that very first winter break. Rarely, if ever, have we reached the heights seen prior to it.

Again, there are a multitude of reasons, but our win rate has dropped from 96% to 50%.

We’ve also been beaten 11 times in that period – including a 7-2 reverse to Villa, with a certain Virgil van Dijk in the team.

This begs the question, are there deeper-lying problems? Has this system, team and manager been worked out?

Watching this current version of Liverpool is painful. It’s inconceivable how one of the most frightening attacks in Europe has been reduced to one devoid of ideas. We have scored a single goal at Anfield since December 27. A penalty at that.

Moreover, teams have a clear blueprint to follow when facing the reds, one arguably established by Nigel Pearson in the aforementioned Watford defeat.

We are incapable of breaking through a low block and, given the constant change of personnel in the backline, always likely to give up chances at the other end. That is a recipe for disaster or at the very least, a mid-table finish.

We saw a slight change in tactics for the recent trip to Sheffield United, with Andy Robertson released to play wing-back, but otherwise, new ideas seem thin on the ground.

Sadly, the manager, who has more than enough credit in the bank, is enduring his own run of poor form. He, like his players, looks exhausted and in desperate need of a break.

That said, he cannot be above criticism. Certainly, his substitutions against Chelsea made us weaker.

Perhaps we can press the reset button in the summer and embark on a revenge tour next season, complete with the world’s best defender back among our ranks. Or perhaps that’s just wishful thinking.

Maybe an entirely new approach is the only way out of this fog.

Defense is king in the Champions League

Werner pays tribute to this midfielder at Chelsea

Special moments in Football No. 88

Defense is king in the Champions League

Werner pays tribute to this midfielder at Chelsea

Special moments in Football No. 88